The three Stans of the Great Silk Road

The three Stans of the Great Silk Road 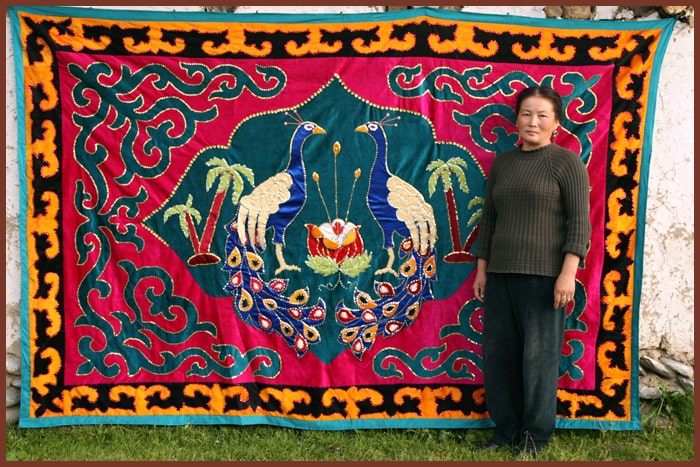 Day 1: Almaty
Today you will arrive to airport. After you will transfer to Almaty. This day you will explore the amazing attraction of the southern capital the Medeu Gorge, this place is known for an incredibly interesting high-altitude ice rink in the world. You will have a small walk where you will see magnificent views and spectacular scenery. After it you will have a ride in a cable car to Shymbulak ski resort area. You will return by cable car. You will continue tour with amazing trip to the top of Kok-Tobe hill, there are located the significant tower of Almaty TV tower. There you will have a chance to get by vivid road. You will start the second part of the tour with exploring the highlights of Almaty. You will visit Almaty Museum*, you are going to explore there interesting history of Kazakhstan and Almaty. Then you will lead to Park of 28 Panfilov Guardsmen, you will find here the outstanding architecture the most charming wooden building in the world - Zenkov Cathedral. You will complete the tour with the Green Bazaar*,you will have a chance here to meander along colorful rows and buy something useful. This night will be in the hotel.

Day 2: Almaty – Charyn – Almaty
You will have a journey to Charyn Canyon. mountains of sedimentary rocks formed more than 12 million years ago. The canyon stretches for 154 kilometers along the Charyn river. And the most interesting from the point of view of tourism is a small 2-kilometer stretch of the canyon, which is called the Valley of Castles. The height in some places reaches 300 meters. The age of sedimentary rocks is 12 million years. The canyon itself is similar to the American Grand Canyon, only smaller in size. It was named after the Charyn river, which flows between the rocks. The beginning of the river is located in the southern side of the Ketmen range. Along the way you will learn the interesting history of Kazakh people and know interesting facts about Kazakhsatn. After arrival to Canyon you will see the grand panorama and observe splendor of the natural attraction. Then you will return to the city. You will spend the night in the hotel.

Day 3: Almaty – Issyk lake – Almaty – Bishkek
This day you will transfer to vivid gorge of Kazakhstan Issyk Gorge that lies along the Kuldja tract. You will have a chance to see today the State Historical and Cultural Museum-Reserve “ISSYK”, you are going to learn the history from the expositions dedicated to the history and culture of the Saka period, where is located Golden Man and golden items, ancient ceramics, weapon, elements of horse equipment, as well as the model of Saka burial mound. After you will move to Issyk lake that is situated at the altitude of 1756 meters above sea level. According to geologists, it was formed about 10000 years ago as a result of a vast mountain collapse, which created a natural 300-meter dam and dammed the valley. Then you will transfer back to the city. After you will be transferred to Bishkek. The overnight is in the hotel.

Day 4: Bishkek – Ala Archa – Bishkek
This day you will have a city tour in the capital of Kyrgyzstan Bishkek. You will visit Pobeda Square (Victory Square), Duboviy Park (Oak Park), Central Ala-Too Square, Old Square, National Philharmonic, and other interesting attractions. Then you will be transferred to Ala Archa gorge. Remarkable for its natural beauty of the national Park, since the thirties, is the best choice for climbers and travelers in Kyrgyzstan. It is located 45 km from the city and is a great place to relax; there is a unique flora and fauna. Here you can see a gorgeous panorama of the gorge. You will transfer back to the city in the end of the tour. The night will be in the hotel.

Day 5: Bishkek – Burana – Chon Kemin
Today you will explore the Asian Bazaar. This day you will buy amazing goods, try national souvenirs or clothes and take colorful pictures. This day you will transfer to Chon Kemin gorge interesting national Park, lakes, and a stormy river. Along the way you will be offered to Burana Tower. This monumental, religious building dates back to the period of domination of the Karakhanid tribes, who owned most of Central Asia 900 years ago. You will also learn the history from an open air museum of Balbals (stone warriors). This day you will explore the top of the tower and see the majestic sights. Then you will continue driving to Chon Kemin. You will have 3 hours of horse riding. The tour route will take you to the mountains and you will admire a mountain forest. You will rest the night in the home stay.

Day 6: Chon Kemin – Issyk Kul lake northern shore – Karakol
After the breakfast you will hit the road to gorgeous lake Issyk Kul. In the deep basin of the North-East of Kyrgyzstan, surrounded by mountain ranges, stretches the beautiful Issyk-Kul – the largest lake in the country and the sixth deepest lake on the planet. Clean brackish water, mild climate and amazing landscapes attract thousands of outdoor enthusiasts and, of course, connoisseurs of beauty here in summer. The lake is located at an altitude of 1608 meters and has a length of 180 km and a width of 70 km. The maximum depth of the lake is 700 meters. You are going to direct today along the north side and see the fabulous beauty of the lake. You will visit on the way ancient stone patterns. After arrival you will see the architectural art of Dungan people the Dungan mosque and significant attraction of the city an old wooden Orthodox Church. You will spend the night in the hotel.

Day 7: Karakol – Jeti Oguz – Issyk Kul southern shore – Kochkor
This day you will departure to Jeti Oguz gorge. One of the most remarkable natural treasures of Kyrgyzstan. A mountain gorge with picturesque red rocks, located 30 km South-West of the city of Karakol. You are goingt o see the Broken Heart Mountain. This day you will also have a chance to admire the gorgeous views of the gorge and take fascinating photos. After you will start driving along the south side of the lake and stop in Bokonbaevo village. You will meet there a local eagle-hunter. He will tell you secrets about traditional way of nomadic hunting. This night will be in a home stay.

Day 8: Kochkor – Son Kul
In the morning you will have an incredible adventure to Son Kul Lake. One of the largest high-altitude lakes and the largest natural freshwater reservoir in the Republic is located at an altitude of 3016 meters. The lake is 13.2 meters deep, 29 kilometers long and 18 kilometers wide.More than 60 species of waterfowl nest on the shores of the lake, as well as snow leopards, red wolves and foxes. Although there are no trees on the gentle banks, there are many rare flowers, including Edelweiss. Then you will arrive to Son Kul and explore the beaches of the lake and explore the enchanting water surface of the lake. You will rest the night in the yurt, covered with felt coverings.

Day 9: Son Kul – 33 parrots Pass – Kochkor – Bishkek
Today you will meet locals and then you will departure to the capital Bishkek. You will transfer along the fascinating pass 33 parrots pass (3 133 m). You will take many interesting photos today. You will arrive to Kochkor village you will be met by a family who will show you the principles of making national felt carpet. You will have a chance to discover the  small handicraft museum there. There you will see many examples of silver decorations, coats made of wolves, horse saddle decorations, carpets and more. The you will be driven to Bishkek. you will spend the night in the hotel.

Day 10: Bishkek – Osh
After the breakfast you will have a morning transfer flight to the city of Osh. You will meander in the streets of Osh. And the you will reach pilgrimage point – Suleiman Mountain. Mount Suleiman-Too (throne of king Solomon) is one of the main attractions of Kyrgyzstan and Central Asia. In 2009, it became the first historical and architectural object of Kyrgyzstan, which was included in the UNESCO world heritage list. According to one legend, the mountain was visited by king Solomon (the prophet Suleiman) and named after him. Sulaiman -Too has had a sacred meaning since ancient times, as indicated by the petroglyphs preserved here. You will also explore Asian Bazaar. This day you will find yourself in the colorful atmosphere. Don’t miss chance to take photos here. You will spend the night in the hotel.

Day 11: Osh – Guliston border – Khujand
In the morning we will drive to Tajik border and further to Khujand city. Today you will get acquainted with Tajik guide on the border and transfer to Khujand city. a city in the North of Tajikistan, the administrative center of Sughd province. The population is 149,000 inhabitants.One of the oldest cities in Central Asia. The second largest city in Tajikistan, an important transport hub, political, economic, cultural and scientific center of the country. In course of the tour you will explore a Cultural Palace of Khujand. And observe Central Mosque that is situated in the heart of the city. The overnight is in the hotel.

Day 12: Khujand – Iskanderkul Lake
You will have an adventure today to high Mountain lake – Iskanderkul (2 255 m. a. s. l.). in Tajikistan on the Northern slopes of the Hissar range in the Fann mountains. According to legend, lake Iskanderkul got its name from the name of Alexander the great.  Fann mountains belong to the Pamir-Altai mountain system, and they are located right on the territory of Central Asia. They are considered a fantastic territory for traveling. You will explore the lake after arrival and see emerald surface. Then you will have a chance to explore the waterfall. Tajikistan is on the 2nd place in the CIS countries in terms of water resources: it has the highest water reserves of all Central Asian countries with more than 1 000 rivers, 2 000 lakes and 8000 glaciers. You will spend the night in homestay.

Day 13: Iskanderkul – Dushanbe
After the breakfast you will departure to Dushanbe through amazing Anzob pass (3 372 m) and tunnel of Isticlol. You will be amazed by the magnificent sights of mountain passes and on the way you will take pictures of natural beauty. After arrival to the city you will have a city tour. You will visit Rudake Park, National library, White House, National state seal, and House of parliament. Then you will move to fascinate National park, Ministry of Inner Affairs and the biggest National Flag in the world – 165 m high pole, 30 m wide, 60 m long. Then you will go to Central Museum and complete the tour with Gurminj Museum of traditional musical instruments. The overnight is in the hotel.

Day 14: Flight
In the morning is transfer to the airport.