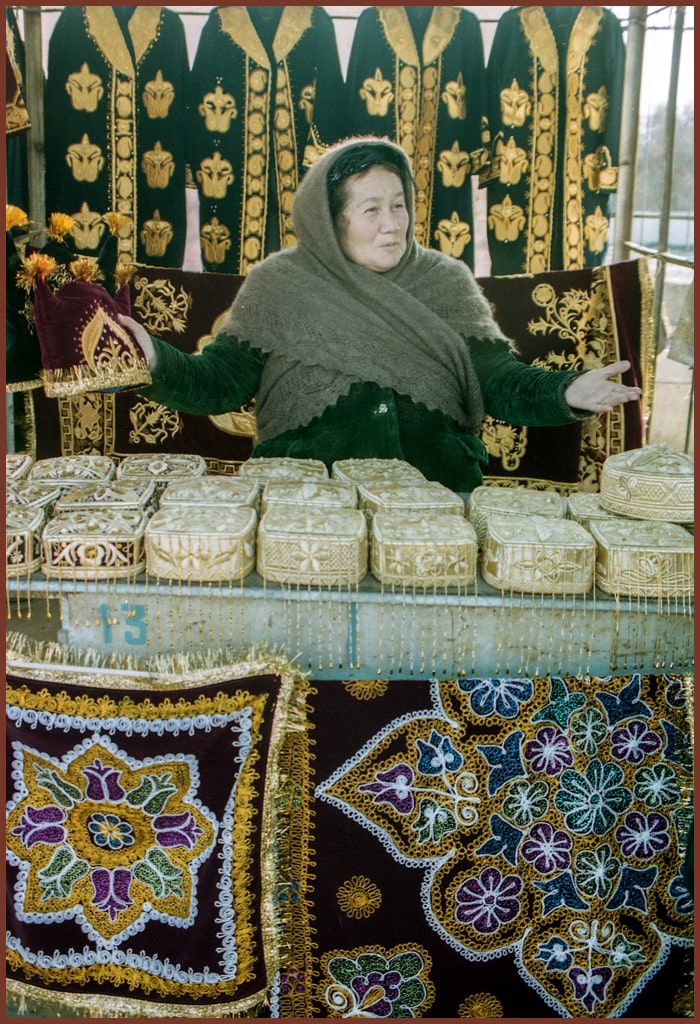 Name of the tour: Beauty Paradise

Day 1: Tashkent– Nukus
Today in the morning you will have a flight to Nukus. Today you will have a full day city tour in this city.  First you will visit the Museum of Savitsky which exhibits the masterpieces of forbidden art. Museum collects 20th century Russian avant-garde paintings, works of Sokolov, Komarovskiy and Amaravella group. The curator of the Karakalpakstan state museum of art collected the artworks in 1960s. He purchased banned works from persecuted soviet artists, sometimes free. He carefully preserved and finally exhibited them in this remote central Asian art-house. After that we will drive outside of Nukus to see Mizdakhan necropolis which used to be an ancient city centuries ago. Archaeological findings confirmed that area was continuously captured from the 4th century BC till about 14th century AD. Moreover, you will visit a 2200 years-old Zoroastrian ancient monument known as Chilpyk. At the end of the tour you will be transferred to the hotel.

Day 2: Nukus – Khiva
After breakfast we will transfer to Khiva. Today you will have a wonderful sightseeing tour in the oldest city of Uzbekistan. It will be inside of Ichan-Qala, the inner city in Khiva rounded with strong walls. Centuries old sound buildings, palaces, mosques, Madrasahs, Mausoleums, Minarets, Caravan-Sarais and Bathhouses transformed Ichan-Qala into unique city-monument. Ichan-Qala consists of over 400 traditional dwelling houses and about 60 architectural monuments. In 1969 Ichan-Qala was designated a historical and architectural conservation area. The most remarkable sites in it are the Kunya-Ark fortress dating back to 17th century, found by Muhammad Arang Khan, Kalta Minor minaret and Tash Khouvli palace, an incredible sample of Khorezm architectural mastership of 1830s. At the end of the tour you will be transferred to the hotel.

Day 3: Khiva – Bukhara
On the third day of your “Beauty Paradise” tour we will have transfer to a fascinating city of Bukhara.  With its more than 140 architectural monuments Bukhara is a "town museum" dating back to the Middle Ages. The city consists of narrow streets, green parks and gardens, historical and architectural monuments belong to different epochs, but locate very close to each other. The road from Khiva to Bukhara goes through famous Kizilkum desert. On the way we will enjoy the view to Amu Darya river, the deepest river in Central Asia, formed by the confluence of the Panj and Vakhsh in Tajikistan and flowing into Aral See. Upon arrival in Bukhara you will have free time. Today’s night also will be spent in a hotel.

Day 4: Bukhara
This entire day will be dedicated to a sightseeing tour in the fascinating city of Bukhara. First of all you will visit the most ancient citadel in Bukhara dating back to the 4th century named Citadel Ark which served as a palace for several dynasties of Bukhara Empire. Then you will see Samanids mausoleum, a real masterpiece of architecture of 9th -10th century. Then the tour continues to Chashma Ayub, meaning Job's well and Bolo-Hauz mosque, known also as the mosque of forty columns built in honor of Bukhara governor Abu-Fayud Khan. Then you have a chance to walk along the shopping domes and visit one of the most famous madrasahs of Bukhara called Nodir Divan Begi which is also a part of Lyabi House Ensemble, famous central sightseeing of Bukhara. The tour will end with visiting Poi Kalon complex, the unique sample of architectural art of Bukhara. It consists of three structures built in the 12th - 16th centuries: Kalon minaret, Kalon mosque and Mir Arab Madrasah. At the end of the tour you will be transferred to the hotel.

Day 5: Bukhara – Yurts camp of Nurata
After having breakfast, we will start the tour to a small town of Nurata, located in the foothills of Nuratau Mountains. People refer the origin of the city to the fortress Nur, which was founded by Alexander the Great in 4th century BC. However, according to archeological excavations the cultural layer in this area reaches the age of 40 thousand years. Upon arrival you will have a sightseeing tour that includes: visit the Khasan- Khuseyn Mosque, blacksmith’s and potter’s workshops and a sacred pond with sacred fishes, a place for pilgrimage by Muslim worshipers in Nurata. Moreover, you will visit the Medressa of Sheihun Hasan Nury, Mamazgokh Mosque and remains of so called "Alexander the Great’s Fortress”. Then we will continue the drive to yurt camp in dessert. Today you will sleep in a yurts.

Day 6: Nurata – Samarkand
In the morning we will transfer to Samarkand. Samarkand is situated in the valley of the river Zerafshan. It is the second largest city of Uzbekistan and is of the same age as the city of Babylon or Rome. Today you will visit its most outstanding sights such as Registan square, Shakhi-Zindeh, Mausoleum Guri Emir and Bibi Khanum Mosque. Registan Square, a complex of three fascinating Madrasahs dating back to 15-17th centuries, is the main highlight of Samarkand that no person can stop admiring its beauty and majesty. Architectural complex of Shakhi-Zindeh represents a big collection of mausoleums dating back to 11th-15 centuries being a part of a UNESCO World Heritage Site. Bibi Khanum Mosque was built in honor of favorite Tamerlane’s wife, after his successful campaign in India. For overnight you will stay at the hotel.

Day 7: Samarkand – Tashkent
In the morning we will transfer to Tashkent by train. Today you will visit Independence square which is the main square of the country, erected as a symbol of victory over fascism in World War II. Then you will have a chance to walk along the local Broadway, a walking street between independence square and Amir Timur square. Further you can take a ride in famous Tashkent metro, among the most beautiful subways in the world. First line was opened in 1977. Then you will visit the old part of the city which includes: Chorsu Bazaar, Kukaldash Madrasah and Hast Imam complex that consists of several madrasahs, mosques and mausoleum. The highlight of its exhibits is the Othman Quran which is the world’s oldest Quran copy dating back to 8th c. Quran belonged to Othman Ibn Affan, the Third Caliph (of the four righteous Caliphs who succeeded the prophet Muhammad). Othman was killed by non-muslims in 8th century. His blood spred over the Quran that you still can see on its pages. At the end of the tour you will be transferred to the hotel.

Day 8: Tashkent – Flight
Today you are returning your home. The transfer will take you to the airport. This is the last day of your “Beauty Paradise” tour in Uzbekistan.

Service does not include:
- Visa
- Full board
- Travel insurance
- English speaking guide
- Entrances to all museums
- Flight tickets Tashkent – Nukus